It’s funny when out street shooting, some people don’t want their picture taken and some love to have it done. The dude above wanted me to stop and do a photo shoot here outside his antique (junk) shop. Stayed for a few minutes, took some images and he gave our friend Sheilaaaah a ring for our efforts. Guess he thought she was my wife. Anyways, to get to the point, we brought a print of the above image to him in his store. After dropping it off, and he was way beyond thrilled, we continued into Yaffo, which is part of Tel Aviv. Here are some images from that walk. 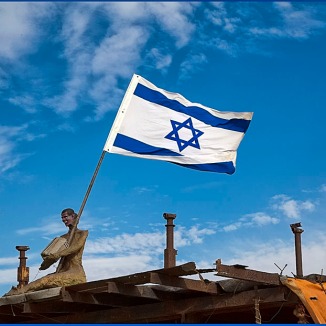 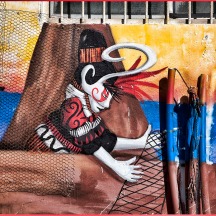 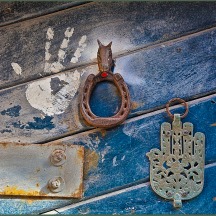 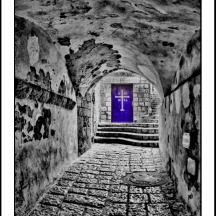 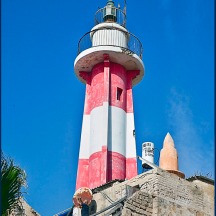 Back by popular demand, from my two cat loving friends, here are some more Cats of Israel…

In the months of February and March, Israeli’s like to travel to see and photograph the fields of Koloniot in full bloom. Last year we traveled to the Negev Desert, near Gaza, to see this wondrous sight of acres and acres of red anemones. This year we traveled north near Megiddo to see them, but unfortunately we were a bit late and most were no longer in bloom.

So what a surprise it was when last week Eileen and I were heading to Tel Aviv, and sure enough, a small hilly area less than a half mile from our house, was covered with the crimson flowers below. Turns out these are poppies, not anemones. Still quite beautiful. We returned the next afternoon to shoot them, and this is what we found.

(Reminder: Click on an image to begin slide show!) 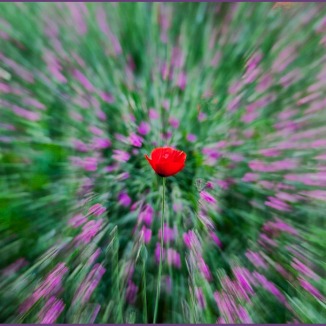 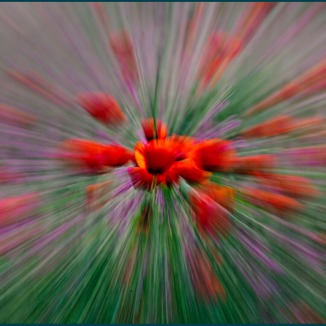 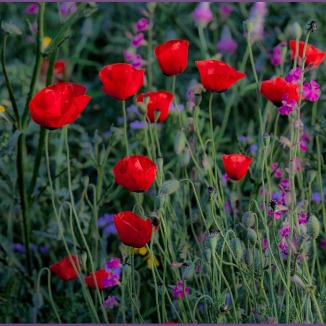 I have really been having a great time sharing with my friends some of my experiences here in Israel. From your much appreciated comments I know that many of you have been enjoying the blog. That makes me feel great.

Today I’m posting a video. It was taken at the beach in Tel Aviv not too far from the Dolphinarium. Saturday is the day when most Israeli’s throughout the country are not working and are out enjoying the beautiful weather. Israeli folk dancing happens each Saturday. I enjoy watching the dancing and hearing the music which is so unfamiliar to me. Mot-Kot is a ‘game’ that I think every Israeli has participated in at least once in their lifetime. I remember back in 1971 when my wife Donna and I visited Eileen and her husband Ami,  we used to play it all the time. Even brought a set back home.

Just want to share another experience in Israel. Enjoy! 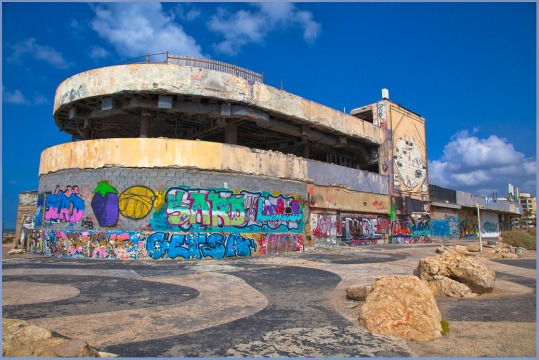 The Dolphinarium, which is located alongside the beach in Tel Aviv, opened in 1981. It immediately became a popular attraction for Israelis and thousands stood on long lines to see the show. At night, its spotlights lit up the skies over the city. According to what I read, earnings from the first month of operations were enough to cover all the construction costs. In 1985, after some financial shenanigans by the investors, the Dolphinarium closed.

The video below shows a brief look at the Dolphinarium today.

After the closing, several entrepreneurs tried different venues to keep the place alive. One of these new venues was a discotheque which was very popular with young Israeli’s.. On June 1, 2001  a suicide bomber, Saeed Hotari, a terrorist linked to the Palestinian group Hamas,  blew himself up outside the discotheque. One Israeli soldier and 20 civilians, mostly teenagers whose families immigrated from Russia, died in the attack. 15 of those murdered were 18 years old and younger. One was 14!

The Dolphinarium stands alone today beside the Tel Aviv beachfront, as a reminder of the attack. The building is mostly abandoned, except for a small surf shop on the southern end of the building. There are plans to dismantle the remaining structure and develop the shoreline for beach visitors.

As was seen in the video, the Dolphinarium has become an open canvas for graffiti artists. Below is a look at some of their work.

(Reminder: Click on any image to begin the slideshow.) 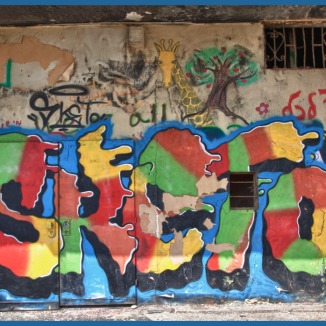 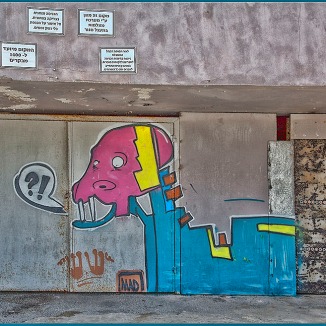 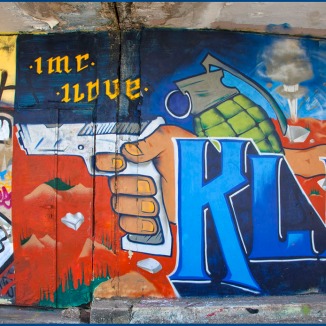 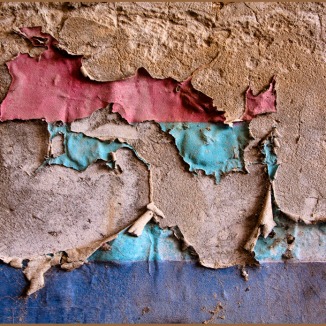 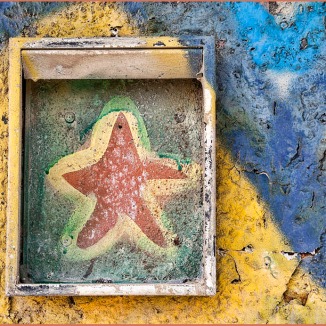 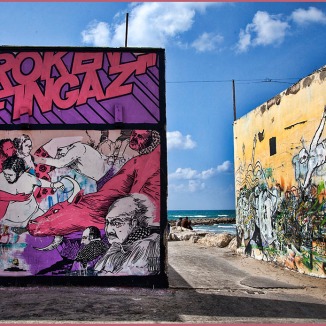 We recently saw the group SheRock perform in a local club, ‘Bourbon Street‘. SheRock is an all-girl Israeli band that has been together for about 10 years. They describe themselves as “bad ass woman playing Good Time music.” The members are – Shelley Ellen – guitar and vocals, Betty Maoz – bass and vocals, Erit Gil – acoustic and vocals, Yael Cohen – drums. SheRock member, and personal friend of ours, Shelley Ellen, or as I call her, ‘Shelley Rock & Roll’, says, “we  try to give the best of rock, blues, country, and covers that people know, to make it fun.”

We did have a great time that night. The video shows parts of that evening’s performance.

It is an ancient Jewish custom to dress up in different costumes on Purim. There are several explanations as to why it is done. One explanation by a rabbi is that people dress up and wear masks on Purim, to commemorate that fact recorded in the Megila, that after the Jews got the upper hand, many of the local non-Jews dressed up as Jews in the hope of escaping punishment. Another reason stated by a Lubovitcher rabbi is “Purim reminds us that while we don’t usually see ‘sea splitting’ miracles, there is a ‘hidden hand’ directing our experiences ensuring our lives play out according to the divine plan. While our world seems to be running on its own full of random unrelated events, it is G-d who hides behind the curtain of fate directing our experiences. To celebrate that, we hide ourselves by dressing up in costumes, appearing as something else, while our true selves remain hidden underneath the masquerade.” Whatever the reason, it is “Israel’s Halloween” and it is fun.

In this blog I want to share the images of the adults and families that participated in the Purim celebration in Herzlia.

(Reminder: Please click on any image below to begin slide show.) 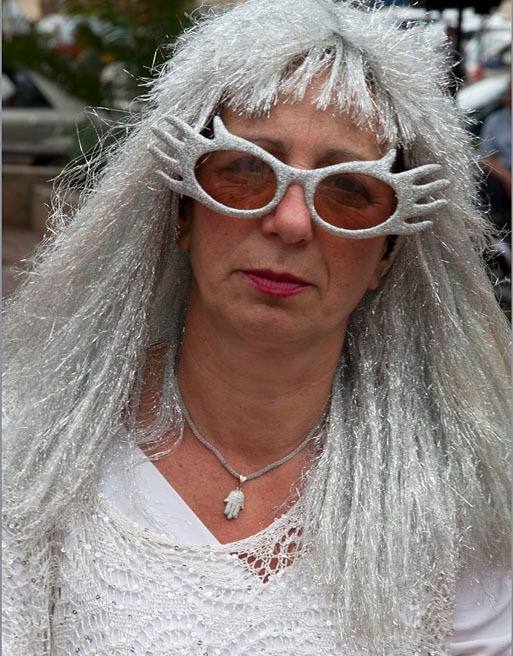 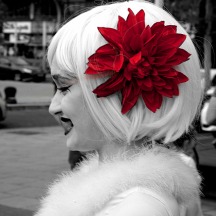 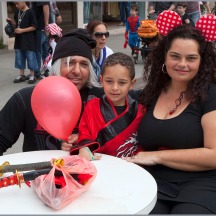 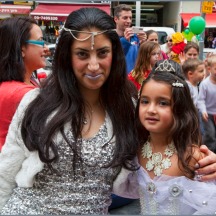 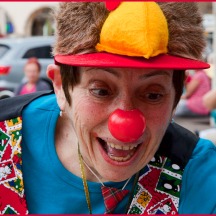 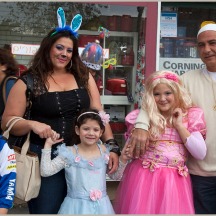 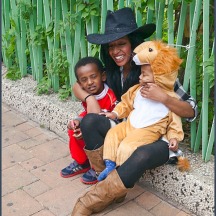 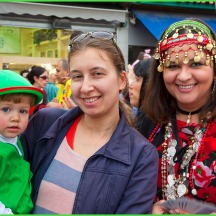 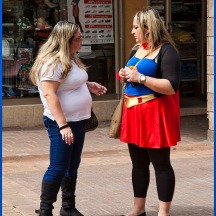 We celebrated Purim last week. For those who don’t know about the holiday, the festival of Purim is celebrated every year on the 14th of the Hebrew month of Adar (late winter/early spring). It commemorates the salvation of the Jewish people in ancient Persia from Haman’s plot “to destroy, kill and annihilate all the Jews, young and old, infants and women, in a single day.”

The Persian empire of the 4th century BCE extended over 127 countries, and all the Jews were its subjects. When King Ahasuerus had his wife, Queen Vashti, executed for failing to follow his orders, he held a beauty pageant to find a new queen. A Jewish girl, Esther, found ‘favor in his eyes’ and became the new queen—though she refused to divulge the identity of her nationality.

Meanwhile, the anti-Semitic Haman was appointed prime minister of the empire. Mordechai, the leader of the Jews (and Esther’s cousin), defied the king’s orders and refused to bow to Haman. Haman was extremely angry and convinced the king to issue a decree ordering the extermination of all the Jews on the 13th of Adar—a date chosen by a lottery Haman made.

Mordechai brought all the Jews together, convincing them to repent, fast and pray to G‑d. Meanwhile, Esther asked the king and Haman to join her for a feast. At the feast, Esther revealed to the king her Jewish identity. Haman was hanged, Mordechai was appointed prime minister in his stead, and a new decree was issued—granting the Jews the right to defend themselves against their enemies. On the 13th of Adar the Jews mobilized and killed many of their enemies. On the 14th of Adar they rested and celebrated.

Purim is celebrated by giving gifts of food and drink (mishloach manot), giving charity to the poor (mattanot la-evyonim), a celebratory meal, and public recitation of the Scroll of Esther (kriat ha-megillah). Other customs include drinking wine, wearing of masks and costumes, and public celebration

Purim is celebrated throughout Israel, with most towns, cities and villages having some sort of festivities. In Herzlia, it was a simple celebration with some music and games. Very simple and very family friendly. The images below are from the celebration. Today I look at the young people and how they dressed up to celebrate the holiday.

(Reminder: Click on any image below to begin slideshow!) 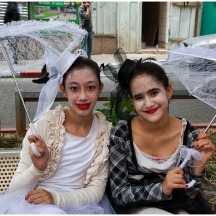 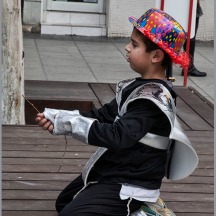 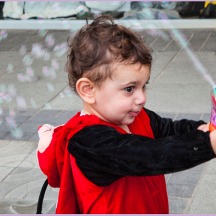 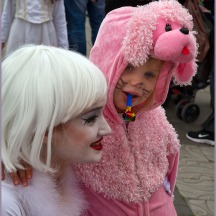 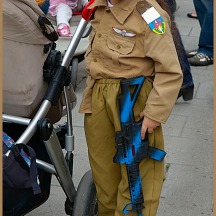 Eileen, our friend ‘Sheilaaah’, and I recently visited the Old City of Jerusalem. One of the things that I find interesting about Jerusalem is that four cultures and religions are able to co-exist together, although the control of East Jerusalem and The Temple Mount has been a  political issue for many years. I want to share a little glimpse of two of these cultures all seen through the eyes of  my camera and iPhone (video).

The video below, begins with a Bar Mitzvah celebration held at the Western Wall (Kotel). Bar Mitzvahs, Jewish boys coming of age, are frequently held at the Wall in the Old City. Many that are held there are Israeli young men celebrating this special day, but people from around the world come to the wall to become Bar Mitzvah. The women are observing from their side of the Wall and candy can be seen being tossed around by the people attending.

One example of the contrast of culture/religion found in Jerusalem is the Muslim Adhan or ‘call to prayer’. We were touring The City of David, which is located just outside the Old City, when we heard the Adhan sounding from the the mosques in the Silwan neighborhood of East Jerusalem. The Adhan is heard five times a day, calling the Palestinian Muslims of Silwan and Muslims throughout the city to stop, kneel towards Mecca, and pray. Silwan, seen in the video, is a predominantly Palestinian neighborhood Forty Jewish families also live in the area. Silwan is located in East Jerusalem.

At the end of the video, after panning Silwan, you will see the Mount of Olives. This bare hilly area, once containing hundreds of olive trees,  has been used as a Jewish cemetery for over 3,000 years and holds approximately 150,000 graves. It is still in use today.