Petah Tikva is a city of about 200,000 residents and is located near Tel Aviv and Herzlya (our city). Eileen’s auto mechanic/alarm guy is located there. While she was taking care of business I walked about 200 meters (hey, we’re in Israel) and found this relic. located amongst an orange grove, the contrast of the old and new was striking to me. 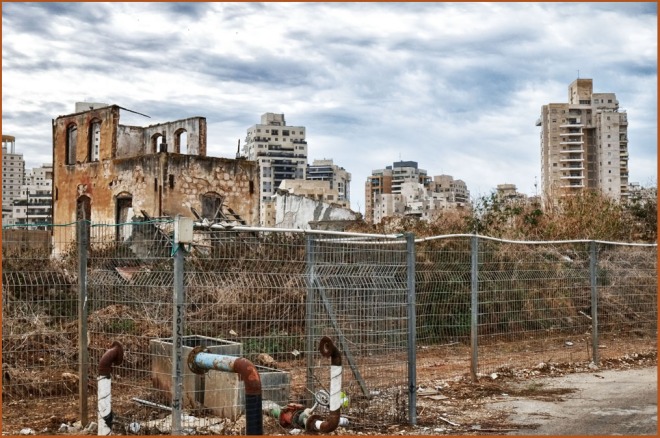 Continuing less than a kilometer from this site I came upon the cemetery that serves the residents of Petah Tikva. Each city or community has a cemetery and all residents are eligible to be buried there.

This particular gravesite stood out because of the number of stones that have been placed on it. The placing of stones on a Jewish grave is a tradition that nobody knows for sure why it started. Some believe that the stones help keep the body from moving. Others say that in Israel, people were asked to bring a stone in place of flowers. The most sacred place for Jews, the Western Wall, is actually a pile of arranged stones. Whatever one believes, this person appeared to be very popular, or, so unpopular that they wanted to make sure his soul never rose again.

Well the inevitable has finally happened. 5Pointz was whitewashed on November 18th. Check out this article about it.  http://boromag.com/featured/5-pointz-is-gone/

Fortunately, as you know, we were able to get there before its’ demise. The wonderful artwork was  from graffiti artists from all around the world. So here are my last images from 5Pointz…

5Pointz  is an outdoor art exhibit space in Long Island City, New York, considered to be the world’s premiere “graffiti Mecca,” where aerosol artists from around the globe paint colorful pieces on the walls of a 200,000-square-foot factory building.

The name 5Pointz signifies the five boroughs coming together as one but, because of its reputation as an epicenter of the graffiti scene, the industrial complex has actually united aerosol artists from across the world. Legendary writers from Canada, Switzerland, the Netherlands, Japan, Brazil, and all over the United States have painted on the building walls, including Stay High 149, Tracy 168, Cope2, Part, and Tats Cru.

The gallery curator is graffiti veteran Jonathan Cohen, best known by his signature tag, “Meres One.” His goal is to convert the five-story, block-long industrial complex at Jackson Avenue and Davis Street, formerly the Phun Phactory, into a graffiti art museum.

The building’s owners, Jerry Wolkoff and his son David, have already received approval for plans to redevelop the property into two residential towers. They want to have demolition completed by the end of the year. A federal judge has refused to grant an injunction that would have stopped the planned demolition of the 5Pointz graffiti mecca in Long Island City.  Meres and his organization are appealing and applying for landmark status for the building.

Eileen and I visited 5Pointz over the weekend as we wanted to get some images before the wrecking ball strikes. Turns out we ran into the rally to save 5Pointz. Below are some of the images from the rally. Tomorrow I’ll post some of the graffiti that will be destroyed if the building is torn down.

(Reminder: Click on any image to begin slide show!) 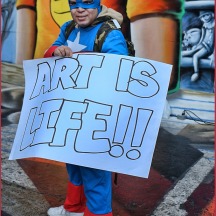 When we recently visited The Scranton Lace Co., Chris the owner, took several of us on a tour of the buildings that comprise Scranton Lace. It’s an amazing place with many rooms, passageways, bridges, etc.. to be discovered. But, one of the most interesting things Chris shared with us are the tales of a ghost that is inhabiting the buildings. Seems like the ghost has been sighted on several occasions by  different people in several different locations.

We, unfortunately, did not run into this ghost. But, we were fortunate to run into two others that appeared to me on my two visits there. One, the male, is creepy and ugly while the other is quite pleasant to the eye. The ghosts did not bother us but they seemed to follow us around and I think one came home with us.  Now, every time when I look in a mirror I see a vision of that horrible ghost. Guess that’s what happens when you bother the sleeping.

Not easy to capture, these are some of the images we were able to make. Enjoy!  And yes, I know, I probably should have posted this for Halloween!

When I first re-connected with Eileen four years ago, after not seeing each other for over 30 years, we were going to spend a weekend in Washington DC attending my friend John and Cathy Barclay’s daughter Brittany’s wedding to John Rolph. I bought her a small pocket camera so that she could take some photos in DC and at the wedding. She really had no idea what she was doing, yes, she will readily admit it, and we got a few laughs over her first images. (I didn’t know that the Washington Memorial was leaning more that the Tower of Pisa). But she quickly got the hang of it and I gave her my Canon Rebel to use.

What we both discovered is that she really has a terrific eye, something I am very envious of. So, I’d like to share some of her images from our visit to The Scranton Lace Co. earlier this year.